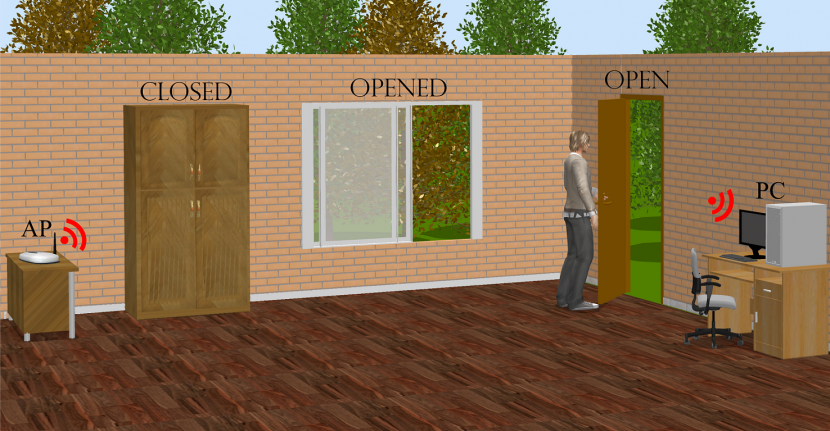 Detecting the events of indoor everyday objects such as door or window open/close events has been actively studied to implement such applications as intrusion detection, adaptive HVAC control, and monitoring an independently living elderly person.
This study proposes a method for detecting the events and states of indoor everyday objects such as doors and windows without using distributed sensors attached to the objects. In this study, we achieve practical and unobtrusive event detection using a commodity Wi-Fi access point and a computer equipped with a commodity Wi-Fi module. Specifically, we detect the events using Wi-Fi channel state information (CSI), which describes how a signal propagates from a transmitter to a receiver, and is affected by such events.
To handle CSI data that consists of the mixed effects of multiple indoor objects in an environment of interest, we employ independent component analysis to separate the events caused by the objects. The decomposed data are then fed into our event classifier based on convolutional and recurrent neural networks to automatically extract features from CSI data, as it is difficult to intuitively design features to be extracted from the CSI data. Moreover, we correct the neural network estimates by incorporating knowledge about the state transitions of an object using hidden Markov models. For example, because the “open” event of a door occurs only when the door is in a “closed” state. We correct impossible state transitions estimated by the neural network based on this knowledge.